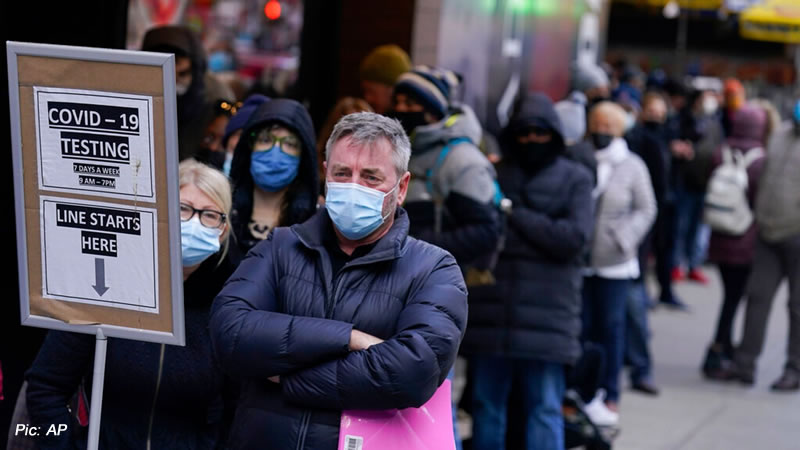 The United States set a new COVID-19 hospitalization record Monday, reaching 140,000 patients for the first time since the pandemic began — a sign, experts say, that the country’s Omicron surge is already more severe than in other countries and will only get worse as it spreads from highly vaccinated cities to less protected areas of the country.

According to New York Times data, America’s previous hospitalization peak began on January 6, 2021, when 139,781 COVID patients were hospitalized nationwide. However, that was several months before a mass vaccination campaign kicked in, protecting recipients from the vast majority of severe diseases.

The number of Americans admitted to the hospital with COVID-19 reached 142,388 on Monday.

Americans who have repeatedly heard that the hypermutated Omicron variant — which has triggered an unprecedented wave of breakthrough cases in vaccinated and previously infected individuals — is ultimately milder because it is less likely to seriously sicken those who catch it may be surprised by news of a new U.S. hospitalization record.

“I think people have fixated on this idea that it’s mild,” New York University epidemiologist Céline Gounder recently told New York magazine. “Mild means mild — relatively mild — for the individual who’s infected. But it does not necessarily mean mild at a population level.”

The new hospitalization figures in the United States, including rising ICU admissions in the cities where Omicron has struck first, suggest just that: if even a milder variant infects enough people, the resulting surge can be anything but “mild.”

As Gounder and others have pointed out, the problem is twofold.

First, there is a huge amount of virus circulating right now, with a daily average of 677,243 new cases (the current 7-day average is 677,243) that is nearly three times higher than ever before. According to virologist Trevor Bedford of the Fred Hutchinson Institute in Seattle, calculated tests are now catching only one in every four or five U.S. infections, implying that Omicron is infecting more than 3 million Americans each day.

Second, this previously unthinkable level of spread ensures that Omicron reaches as many people as possible who are at increased risk of hospitalization: the completely unvaccinated (83 million Americans); the vaccinated but unboosted (132 million Americans); and, in particular, seniors who are not boosted (26 million) or even fully vaccinated (7 million) and who remain most vulnerable to severe disease.

Then, as with previous versions of the virus, Omicron sends far too many of them to the hospital, nearly all of whom are unvaccinated or under-vaccinated.

Not all of the news about hospitalizations in the United States is depressing. Doctors are reporting fewer patients on ventilators and shorter hospital stays than in previous waves, which is consistent with increased population immunity and a variant that does not latch onto lung cells as well as its predecessors. And data from various states show that a significant proportion of COVID-19 patients tested positive “incidentally” while being admitted for another ailment, stating that Omicron isn’t the cause of their illness.

Unfortunately, as New York City emergency room doctor Craig Spencer explained Monday on Twitter, “entering the hospital WITH Covid versus FOR Covid isn’t a relevant distinction if the hospital doesn’t have the beds or providers needed to care for its patients. And the distinction isn’t always clear even to providers. Nor does it matter practically.”
“Every Covid + patient requires the same isolation to protect other patients from getting infected,” Spencer continued. “They require the same use of PPE. And they all represent another infection risk to providers. Most importantly they all require the same space in a bed. And that’s in short supply.”

In a New York Times op-ed published Monday titled, “As an E.R. Doctor, I Fear Health Care Collapse More Than Omicron,” Spencer elaborated on why U.S. hospitals trying to treat more than 140,000 COVID-19 patients at once represents an “unfolding tragedy.”

Among the reasons he mentioned: “‘classic’ COVID-19 patients, short of breath and needing oxygen,” all of whom are unvaccinated; “elderly patients for whom Covid rendered them too weak to get out of bed”; “people with diabetes in whom the virus caused serious and potentially fatal complications”; and on top of that “many hospitals [now] seeing their highest levels of employee infections of the pandemic,” with some having “lost 15 percent of their workforce or more.”

“The Omicron surge is real — and even if Omicron is ‘milder,’ it’s not mild,” Spencer concluded on Twitter. “It causes severe disease half as often as Delta, but infects 2-4x as many people, potentially washing out any potential ‘benefit
Data from early Omicron hotspots in the United States is starting to support this. Hospitalizations in Chicago have surpassed 150 percent of last winter’s peak; there are now more Chicagoans in the ICU or on ventilators than there were a year ago.

Hospitalizations in New York City and Washington, D.C. have also surpassed last winter’s highs, and ICU and ventilator numbers are the same nearly on a vertical rise.

Initially, experts were encouraged by reports out of London showing that “despite steep rises in cases and patients, the number on ventilators has barely risen,” as Financial Times data journalist John Burn-Murdoch tweeted last Tuesday. Meanwhile, Burn-Murdoch continued, “the number of people in London ICUs has fallen in recent weeks, and is not following the same path as last winter.”

Why? Former FDA Commissioner Scott Gottlieb has suggested that “lower U.S. vax/booster rates” may be to blame.

“U.S. decoupling between cases, hospitalizations, deaths, while measurable vs prior waves, isn’t as strong as the UK; perhaps due to lower U.S. vax/booster rates (50% eligible adults boosted),” Gottlieb tweeted Sunday. “Our protracted wrangling over boosters may have sowed confusion, sapping consumer interest.”

Indeed, while the United States has a slightly lower two-dose vaccination rate (62 percent of the total population) than the United Kingdom (69 percent), its boosted rate is less than half as high: 23 percent here vs. 52 percent there.

What this means for Omicron deaths in the United States remains to be seen. According to a New York Times analysis published Monday, the trajectory of COVID deaths is increasing rapidly in New York City, Boston, and Washington, D.C., and is closely tracking the trajectory of cases from three weeks ago. (It usually takes about that long for a terminal COVID patient to succumb to the disease.)

While those cities have had fewer deaths per case this winter than last, they are also reporting far more cases now than they did previously — more than six times as many per day in New York City, for example. The absolute number of deaths this winter may rise as the worst of those cases work their way through the overburdened hospital system.
When Omicron took hold, the deadlier Delta variant was already generating its own wave in the Northeast. As a result, lingering Delta cases may make Omicron appear worse than it is.

Meanwhile, in a state like Maryland, 20% of hospitals are reporting staff shortages, and the COVID-19 Hospital Capacity Circuit Breaker dashboard shows that every single county appears to have reached or exceeded its hospital capacity.
“I can attest the situation in Maryland is [expletive] horrendous,” one physician wrote to the dashboard’s creator. “The state has been maxed out for about 2 weeks. Multiple hospitals are operating under crisis standards of care. EMS [i.e. ambulances] is now so taxed that Baltimore County started transporting people in fire trucks last week.

This is absolutely unheard of and absurd. Reports of people waiting over 1-2 hours on the scene with firefighters before an EMS unit gets there. Then when they get to the hospital they wait literally hours for a bed. Transfer centers now just laugh when you call, the system is so backlogged. It’s mind-boggling to me how none of this has been national news.”

This article originally appeared on Yahoo News and has been updated.

How Do You Get The California Stimulus Checks?
Six active-duty commanders were relieved of their duties after refusing COVID-19 Vaccine