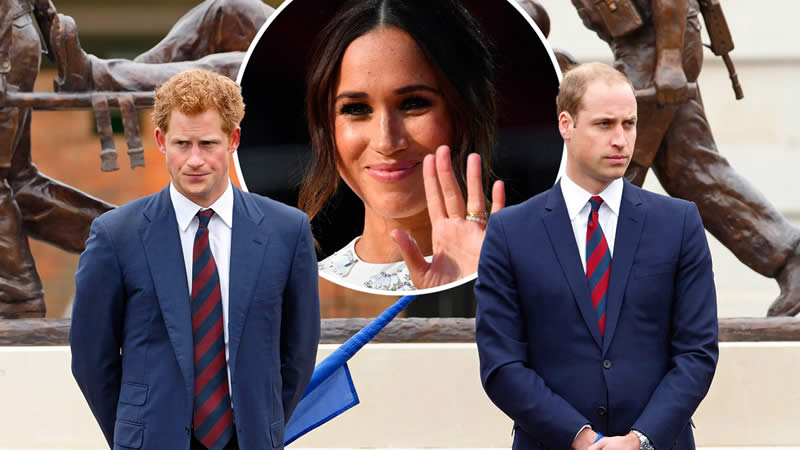 According to a new book, Prince Harry and Prince William once had a strong bond, but things became heated when the latter questioned his brother’s fast-moving romance with Meghan Markle.

According to the book, “Brothers And Wives: Inside The Private Lives of William, Kate, Harry, And Meghan,” which will release Tuesday, Harry was so incensed when William questioned his relationship with Meghan that he blurted out, “Who the hell do you think you are?”

According to Page Six, Harry’s alleged outburst occurred in September 2017 when he suggested that he was ready to propose to Meghan, his girlfriend at the time, causing his elder brother to remark, “Why rush things?” The charges were made by a palace source who contributed to Christopher Andersen’s latest book, which delves into the once-close relationship between the “heir and spare” as well as the current Royal Family drama.

Members of Harry’s closest circle allegedly got concerned about his fast romance with Meghan, a divorcee, whom he met on a “blind date” in July five years ago, causing friction between the two brothers.

One of the skeptics was his uncle, Earl Spencer, the late Princess Diana’s brother. He was approached by William to underscore his opinion that the couple should take things slow, but the tactic made “matters far worse” because Harry was “furious that his brother was actively seeking to have others interfere in his personal affairs,” wrote the author. The British royal soon became “angry” with anyone he perceived to be “against” his American girlfriend.

Before she and his brother were introduced, Harry praised Meghan in front of William, but he had previously concerned about what William, who can be “very stiff,” would think of her, fearing he’d think she was “an opportunist.”

According to the book, William was initially charmed but soon began to have doubts about the relationship.

Andersen claims that William and his wife Kate Middleton “wanted a proper English rose” for Harry, and that news about Meghan’s father, Thomas Markle, irritated them. The public warnings of the former “Suit” star’s estranged half-siblings, Thomas Markle Jr. and Samantha Markle, that she would be a poisonous addition to the Royal Family “alarmed” the Duke and Duchess of Cambridge, according to the book.

William allegedly expressed his concerns to his father Prince Charles, and said that his brother’s obsession with Meghan was “like something I’d never seen.” The Duke allegedly said that “it feels like I have lost my best friend.”
As per Latintimes, the book also claims that before recording her holiday broadcast two years ago, Queen Elizabeth had an aide move a portrait of Harry, Meghan, and the couple’s baby Archie off camera. The pair are said to have left the Royal Family as a result of this.

According to Page Six, her alleged decision occurred after Harry chose to spend Christmas with his wife, son, and mother-in-law, Doria Ragland, in Canada rather than with his family in the UK.

Harry and Meghan, who married in 2018 in Windsor, England, are now raising their two children, Archie and Lilibet, in California.