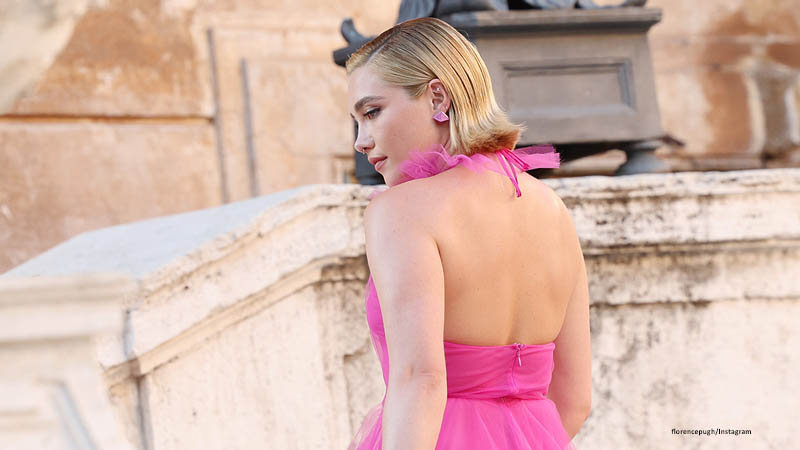 She shared a lengthy caption on Instagram to defend her physique.

Florence Pugh took to social media in a fury after receiving criticism for wearing a sheer, hot pink Valentino gown to the brand’s haute couture shows in Rome, Italy.

The 26-year-old “Don’t Worry Darling” diva published a lengthy caption on Instagram after the event to showcase the autumn 2022–23 collection at the city’s famous Piazza di Spagna to not only defend her figure but also to call for “respect” for all people.

“Listen, I knew when I wore that incredible Valentino dress that there was no way there wouldn’t be a commentary on it,” she wrote to her seven million followers. “Whether it be negative or positive, we all knew what we were doing. I was excited to wear it, not a wink of me was nervous. I wasn’t before, during, or even now after.”

Pugh wore a vivid pink halter neck dress with no undergarments, layers of tulle draping across her chest. A full skirt made of the same material billowed to the floor after being tightened at the waist, as per Fox News.

“What’s been interesting to watch and witness is just how easy it is for men to totally destroy a woman’s body, publicly, proudly, for everyone to see,” she continued. “It isn’t the first time and certainly won’t be the last time a woman will hear what’s wrong with her body from a crowd of strangers, what’s worrying is just how vulgar some of you men can be. Thankfully, I’ve come to terms with the intricacies of my body that make me, me. I’m happy with all of the ‘flaws’ that I couldn’t bear to look at when I was 14.”

The Oscar nominee added: “I’ve lived in my body for a long time. I’m fully aware of my breast size and am not scared of it. What’s more concerning is…. Why are you so scared of breasts? Small? Large? Left? Right? Only one? Maybe none? What. Is. So. Terrifying.”

The “Little Women” star noted that she was grateful to grow up “in a household with very strong, powerful, curvy women” and found “power in the creases of our body.”