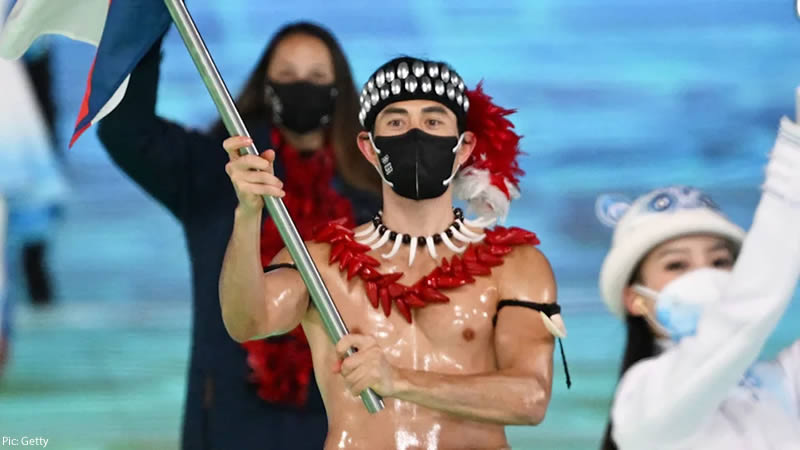 The ‘Hot Tongan’ is a thing of the past. It’s all about the shirtless flag-bearer from American Samoa in 2022.

Nathan Crumpton and his fully oiled-up torso braved the cold to carry his country’s flag into Beijing’s famous “Bird’s Nest” stadium during Friday’s Olympics opening ceremony. American Samoa’s lone athlete competing in the Games became an instant social media sensation as he made his way through the stadium in temperatures hovering around minus-five degrees Celsius.

Tongan athlete Pita Taufatofua started the shirtless trend in 2016 at the Rio Games, where he was termed the “Hot Tongan.” Taufatofua qualified for Rio in taekwondo, then qualified for the next two Olympic games in 2018 and 2020, but announced on social media that he would be unable to compete in his fourth straight Games in 2022.

Crumpton was the man for the job when the world needed a new shirtless idol. He made such an impression that he received a Twitter shoutout from Taufatofua himself, in what appeared to be an official passing of the torch.

And Taufatofua wasn’t the only one who was impressed; Crumpton’s glittering chest blown away millions of viewers around the world.

Crumpton’s fashion choices are especially impressive when compared to what other countries chose to wear when making their entrances. Team Canada, for example, appeared to be fully prepared for an arctic adventure, complete with winter gear.

Crumpton will begin his preparations for the men’s skeleton event, where he will be American Samoa’s first Winter Olympic athlete in 28 years, likely after a few hot showers. Based on this season’s International Bobsleigh and Skeleton Federation rankings, he is ranked 26th.

Let’s hope he’s packed something warm for when he slides head first down the track.