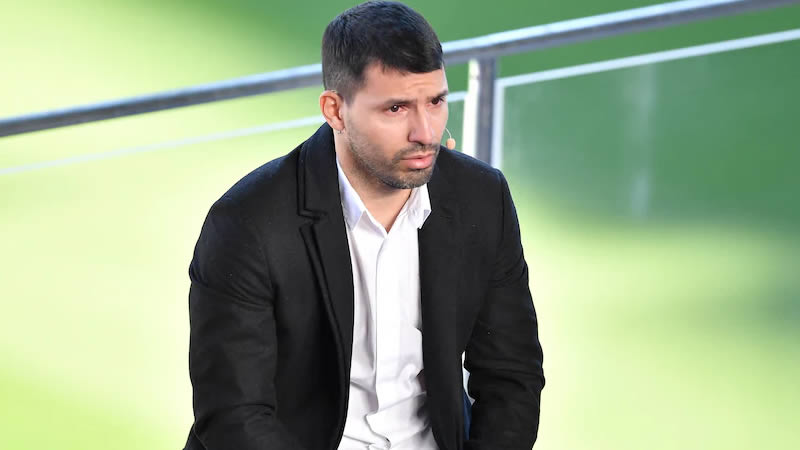 The former Manchester City striker suffers from a cardiac problem.

Sergio Aguero, 33, has announced his retirement from football owing to a heart problem.

The news was confirmed by the Barcelona striker at a press conference at the Nou Camp on Wednesday morning, where he was joined by club president Joan Laporta.

During the first half of Barcelona’s 1-1 home draw with Alaves on October 30, Aguero complained of chest problems and difficulty breathing.

He fell to the turf holding his chest and was treated for several minutes before walking away and being taken to the hospital.

After then, the Argentinian was diagnosed with cardiac arrhythmia (irregular heartbeat).

Emotional and tearful Aguero said: “This conference is to communicate that I have decided to stop playing football.

“It is a very difficult moment. The decision I have made I have taken for my health, that is the main reason, because of the problem that I had a month-and-a-half ago.

“I was in good hands of the medical staff who have done their best and have told me the best thing would be to stop playing.

“So I made that decision about a week ago and I want to tell everyone I did everything possible to have hope, but there wasn’t very much.”

The former Manchester City and Atletico Madrid striker further continued: “I am very proud of the career I have had, very happy.

“I always dreamt of playing football from five years old. I want to show my gratitude to everyone, all of the clubs I played at, and, of course, my love, Argentina.

“I don’t know what awaits me in the next life, but I know there are a lot of people who love me and want the best for me.”

I am very proud of the career I have had, very happy

Laporta, club president, said: “It is as if all the reps of the teams you have played for are right here next to me too. We are left with the joy and excitement of what you could have been here at Barca.

“You have all of our support, anything you need we are here at your disposal.

“You have been an amazing player and everywhere you have played you have achieved so much, not just the talent but also the friendships you made.

“On your first day at Barca, we wished you had come here earlier. We always wanted you to play for our club but a new journey awaits and I hope it will be just as successful, you deserve it.”

As per Belfasttelegraph, Aguero received a standing ovation during the press conference, which was attended by representatives from all of Aguero’s past clubs, including former Barcelona manager Pep Guardiola, who managed him at Manchester City.

Aguero’s brilliant 18-year career began at Independiente when he made his top-flight debut as Argentina’s youngest player. In 2006, he moved to Atletico Madrid for three years before joining City in 2011.

His first season at the Etihad Stadium ended with a career highlight when his injury-time winner against QPR grabbed the trophy from Manchester United, giving City their first title since 1968.

He won five Premier League crowns, six League Cups, and an FA Cup during his ten years at the club, scoring 260 goals in 390 appearances.

His final City appearance ended in the heartbreak of a Champions League final defeat by Chelsea, and his 2014 World Cup final loss to Germany was another low point in his career.

Earlier this year, he helped Argentina win the Copa America, and in five appearances for Barcelona, he scored once, in a 2-1 defeat to Real Madrid.