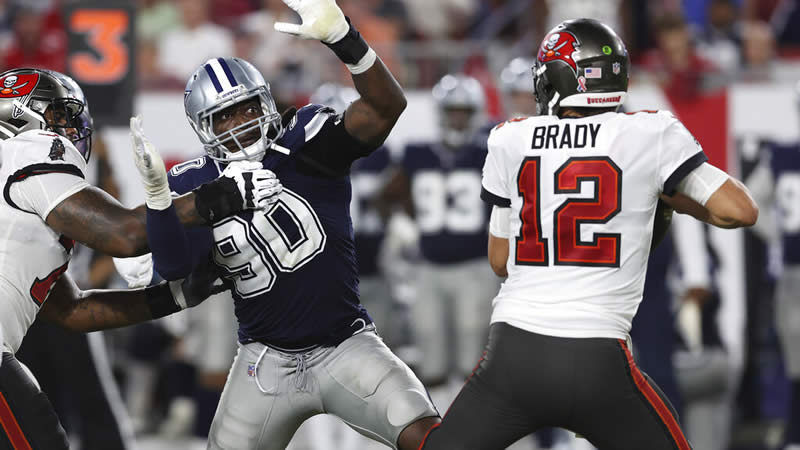 For the first time since COVID-19 upended the globe and changed the way sports we love and watch, Tom Brady calmly ran out of a smoke-filled tunnel, leading the defending Super Bowl champion Buccaneers onto the field against the Dallas Cowboys in front of a full crowd on Thursday night.

The NFL began its most important season – teams will play a 17-game schedule — with no capacity restrictions, following the NBA, NHL, MLB, NCAA, and other leagues in opening their doors to sold-out stadiums.

Despite the fact that there were no limits in place during the preseason, stadiums were not totally full because many spectators chose to skip exhibition games.

That wasn’t the case at Raymond James Stadium, as over 65,000 people turned out to see the game, and the Buccaneers celebrated their championship before beginning the defense of their crown.

“Seven months ago, we made NFL history,” owner Bryan Glazer told the fans during a brief pre-game ceremony. “There was one thing missing: All of you. Welcome back to Raymond James Stadium.”

Thousands of spectators gathered outside the stadium before the game to eat, drink, and they enjoyed the atmosphere while waiting for the gates to open. After that, it was a live game after a long time which has seemed forever to many fans.

COVID-19 is spreading, with roughly 150,000 news cases every day. Hospitals are overflowing because of the delta variant, children are becoming unwell, and some schools are reverting to remote learning due to outbreaks. The death toll in the United States has surpassed 650,000, with one prominent forecast model predicting that it will surpass 750,000 by December 1 – deep into the NFL season.

“We and our clubs are in daily and regular conversations with local and state authorities, but as we sit here right now, we don’t anticipate any reduction in capacity this year,” NFL executive vice president of club business and events Peter O’Reilly said in the league’s last briefing.

“We really feel good about where we stand, given the vaccination rates across the country, and feel as though we will be able to move through the season. Obviously, we don’t take anything for granted; we work closely on all of our protocols, working with and under the guidance of those state and local authorities. As we sit here today, all 30 stadiums are able to be at full capacity and that’s how we expect to go through the season in lockstep with those local and state authorities.”

Various stadium policies and protocols may apply to NFL teams. To enter, fans of the Seattle Seahawks, Las Vegas Raiders, and New Orleans Saints must provide proof of immunization. Other teams may join them along the way.

Some stadiums in college football’s first full weekend were packed, with more people than will attend most NFL games.

“While people are still getting sick, people aren’t dying at the same rate, according to the statistics. That’s the key,” said a chief medical officer of Live Cell Research Health Dr. Rand McLain.

“You go back to where it started, hospitals were loading up and an inordinate amount of people were dying. We’re past that now at least at this time, though we have the delta variant and the mu variant beating the vaccines. From there, being outside is a huge plus. You’re not seeing the transmission when there’s a breeze blowing.”

Several protocols have been eased by the Buccaneers. Regardless of vaccination status, fans will not be temperature checked, and masks will not be necessary, but they are recommended for indoor places. Inside one of the stadium’s club suites, a few supporters wore masks. Another group of fans wore masks in the seats despite being outside.

“We’re vaccinated, we followed all the rules and we’re not afraid,” said Terry Leonas, a Bucs fan, who snatched a pair of tickets off a friend who couldn’t make the game at the last minute.

They lowered their masks for a snap and to drink their beers.

The Tampa Sports Authority is working to clean and sanitize high-traffic areas more thoroughly. Touchless fixtures have been retrofitted in all restrooms, and plexiglass dividers will be installed in all concession stands, with employees wearing masks. This season, all parking lots and concessions will be totally cashless.

“As we have stated all along, our top priority has been, and continues to be, the safety of all players, coaches, staff, and fans at our games,” said Brian Ford, Buccaneer’s chief operating officer.

While an appeals court determines whether the ban is ultimately valid, a Florida judge ruled on Wednesday that the state cannot enforce a prohibition on public schools mandating the wearing of masks to protect against the coronavirus.

The league does not require players to obtain immunizations but strongly encourages them to do so, with rigid protocols for those who do not. 93.5% of players are immunized going into the season opener. Seventeen teams have a winning percentage of more than 95 percent, with the Buccaneers and Falcons both at 100 percent.

Unvaccinated players are tested on a daily basis and must adhere to strict guidelines. Players who have been fully vaccinated are now tested weekly rather than every 14 days as they were throughout training camp.

The NFL Players Association wants daily COVID-19 testing for fully vaccinated players, but the league has not mandated it yet.