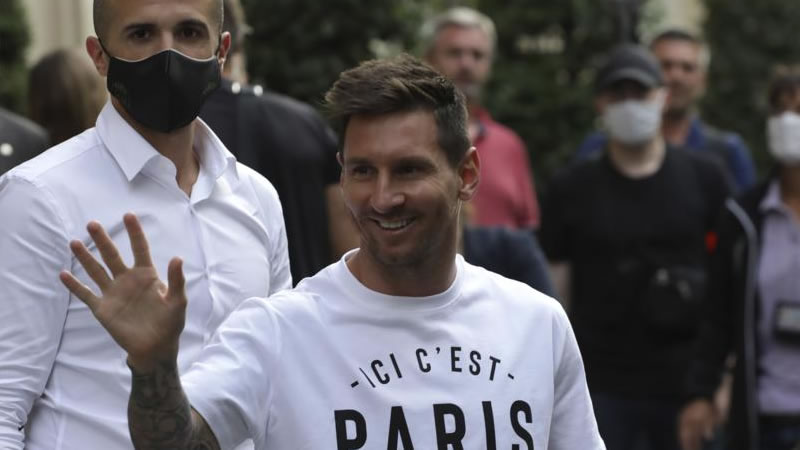 The surprising transfer of the Argentine soccer legend from Barcelona to Paris is likely to boost sales of soccer merchandise and his clothing line.

Following his departure from Barcelona after 20 years, Paris Saint-Germain revealed the arrival of Argentine soccer legend Lionel Messi on Tuesday, in a move that is expected to boost sales of soccer merchandise and his clothing label.
The French club posted a teaser on Twitter that included jump cuts of the Eiffel Tower, a hand holding a pen signing a contract, and a silhouette of the player, along with the taglines “New Diamond in Paris” and “Mercato Update.” In less than 15 minutes, the post had received over 22,000 likes.

The news came after suspenseful few days in which French fans gathered at the Parc des Princes soccer stadium in the hopes of catching a glimpse of the six-time Ballon d’Or winner. Fans followed the flight path of his private jet, which landed in Le Bourget, as media supplied real-time updates on his movements.

In a tearful press conference on Sunday, the 34-year-old said he wanted to stay at Barca, but the club’s dire financial situation made it impossible.

According to media reports, Messi has agreed on a two-year contract with PSG, with an option to extend by a year. He will be joining Neymar and Kilian Mbappé in what has been described as a dream team — provided Mbappé stays at the club.
The deal is said to be worth 75 million euros for the first two years, plus a 25-million-euro signing bonus, confirming Messi’s status as one of the world’s highest-paid athletes. But PSG is set to recoup the cost rapidly, with industry observers predicting that sales of its shirts, produced by Nike’s Jordan Brand, could rise by 200,000 to 300,000 units – according to the source.

The move is also set to benefit Messi’s fashion line. Ginny Hilfiger, founder and creative director of MGO Team, the company that has developed the Messi brand, said the company has done very well in the e-commerce world.
“We’re excited for Leo to make the move. He was excited to work for Barcelona and to stay, but political and financial things happened that were unfortunate. We know that he’s the best player in the world and wherever he goes, he will shine,” said Hilfiger, who is Tommy Hilfiger’s sister.

She noted that the Messi brand she designs is a lifestyle brand and she doesn’t produce the Barcelona jerseys. Nike makes them.

According to the source, Ginny Hilfiger said she expects Messi’s move to PSG will catapult business for his label. The Messi Store online sells a casual lifestyle collection with a sporty edge. The signature stripes are red, light blue, and navy, which she said will go well with the PSG team.

“It’s kind of versatile,” she said. “The PSG colors are similar to Barcelona with the red and blue, and the colors of the French flag“. Hilfiger said they need to make sure that he’s still going to be number 10.

The Messi brand was launched in September 2019 and has grown to include sweaters, hoodies, sweatshirts, and zip jackets. The company is coming out with denim and a sustainable collection, as well as accessories.

According to Maximiliano Ojeda, founder, and chief executive officer of the MGO Team, the line shipped to more than 110 countries in the first year. “The good thing is Leo Messi is such a global name, and every move has an impact, which is always positive as he engages with more people,” he said.

While he said some people will be disappointed that Messi’s leaving Barcelona, he anticipates his path will keep growing.
At present, the U.S. represents more than 50 percent of the Messi Store business. The label also does business in Canada, Germany, Spain, the U.K., and France. It is looking to expand into the Middle East, South America, and China.

On Android and Apple mobile devices, the Messi Store is also available as an application. By the end of the year, the company expects the number of downloads to be in the six digits. It also plans to perform live streams at certain events before the holidays, and to open duty-free shops near Tommy Hilfiger and Ralph Lauren – according to the source.
Tops, T-shirts, and hoodies are currently the current bestsellers, according to Ojeda.

According to WWD, another development is the Messi brand’s expansion into swimwear, underwear, socks, and loungewear, which will be available at the end of this year or early next year, along with subscription services for these categories.