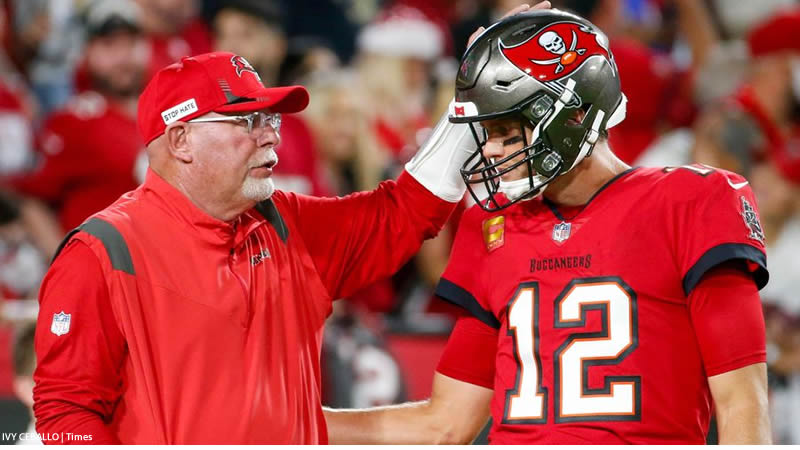 We know one thing about former Buccaneers head coach and current senior advisor Bruce Arians: he doesn’t mince words. When you ask Arians a question, he will give you a straight answer, whether it offends somebody or not.

During Tampa Bay’s three-game losing run earlier this season, offensive coordinator Byron Leftwich faced a lot of criticism from fans and the media.

During their losing streak, the Buccaneers averaged 14.3 points per game, which was four points lower than their season average. Furthermore, the squad boasts the NFL’s second-worst running offense, averaging only 70.7 yards per game.

Arians put part of the burden squarely on Brady’s shoulders in a recent interview with Ira Kaufman. He also mentioned the offensive line’s shifting parts and the struggling running attack.

“I don’t think it was fair to Byron. Nobody is going to say that Brady was playing bad, but he was playing bad,” Arians said. “We also had growing pains on a young offensive front and we weren’t running well. There comes a time as a play-caller when you’re losing yards running the ball and you say, ‘Forget this, I’m putting the ball in Tom’s hands.’ “

During the losing run, Brady completed 62.4% of his passes, passed for 290+ yards twice, and did not throw an interception. He’s been hindered by a shaky offensive line, a slow running game, and a beaten-up bunch of wideouts.

The Buccaneers have been getting healthier, which has coincided with a two-game winning run, including a 21-16 victory over the Seattle Seahawks on Sunday in Germany. Arians feels the club is ready to continue its comeback after a bye week.

“I’m really optimistic about the rest of the season,” Arians said. “First off, we’re getting healthy. Tom smiled at practice last week for the first time this season.

He’s going to be fine. I love the swagger we played with Sunday, especially defensively. It’s been missing. Seattle’s a good running team, but that kid (Walker) went nowhere.”

After beating the Los Angeles Rams and Seattle Seahawks in consecutive weeks, Tampa Bay maintains the first position in the NFC South. After the bye, the Buccaneers head to Cleveland for a 1 p.m. game that also serves as the final week before Deshaun Watson’s return to the lineup.