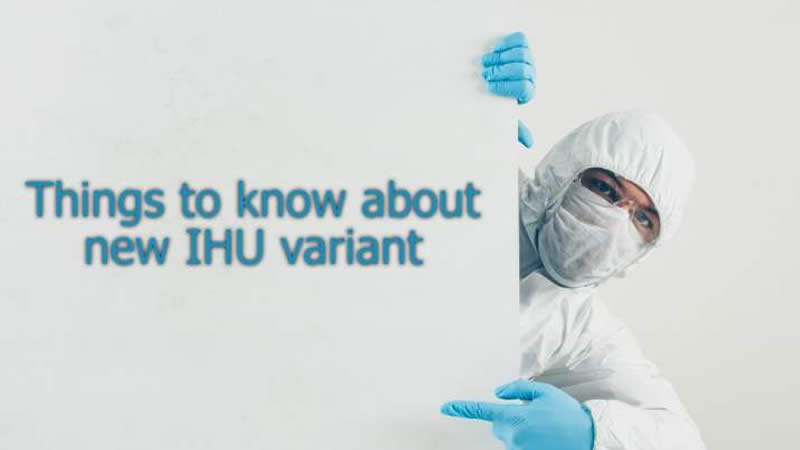 With the Omicron variant of SARS-CoV-2 causing a resurgence of COVID-19 around the globe, we didn’t need another variant.

The novel coronavirus, on the other hand, continues to do what it does best: mutate. And now, French researchers have discovered a new COVID-19 variant, most likely of Cameroonian origin, which they have termed ‘IHU’ for the time being.

What is the IHU variant?

The IHU variant emerged from the B.1.640.2 lineage. It contains 46 mutations and 37 deletions.

According to a peer-reviewed research paper, the spike protein is composed of fourteen amino acid substitutions, including N501Y and E484K, and 9 deletions. This genotype pattern resulted in the creation of a new Pangolin lineage known as B.1.640.2, which is a phylogenetic sister group to the old B.1.640 lineage, which was renamed B.1.640.1.

The IHU variant was discovered by researchers at the IHU Mediterranee Infection Institute, hence its temporary name. According to these researchers, its mutations make it more infectious and vaccine-resistant than Omicron.

According to the results of the tests, the strain carries the N501Y mutation, which was first discovered in the Alpha variant and is thought to make it more transmissible. It also carries the E484K mutation, which makes it more resistant to vaccines.

Where has the IHU variant been detected so far?

So far, 12 cases have been spotted near Marseille, with the first linked to travel to the African country Cameroon.

However, “it is too early to speculate on virological, epidemiological or clinical features of this IHU variant based on these 12 cases,” he added.

How was the IHU variant detected?

When a vaccinated adult returned to France from a vacation in Cameroon, Central Africa, the first case of this new variant was discovered. Three days after returning, he experienced only mild respiratory symptoms.

Philippe Colson noted that his nasopharyngeal sample, taken in mid-November 2021, “showed an uncommon combination that did not correspond to the pattern of the Delta variant involved in almost all SARS-CoV-2 illnesses at the time,” and later to Omicron.

The same combination of mutations was found in respiratory samples collected from seven other SARS-CoV-2-positive patients living in the same geographic area when screened by qPCR. The group consisted of two adults and five children (under the age of 15).

Respiratory samples from the eight patients were sent to the Mediterranee Infection hospital institute for SARS-CoV-2 genome sequencing, according to French public health officials. The findings revealed the mutations and deletions, which assisted the researchers in identifying this variant as part of the B.1.640.2 lineage, which is a phylogenetic sister group to the original B.1.640 lineage, which was renamed B.1.640.1. According to the researchers, the two lineages share 25 nucleotide changes and 33 deletions.

“The mutation set and phylogenetic position of the genomes obtained here indicate, based on our previous definition, a new variant we named ‘IHU’,” Colson said.

What does the IHU variant mean for the pandemic?

The emergence of the IHU variant demonstrates the unpredictability of novel SARS-CoV-2 variants, as well as their introduction and subsequent spread from abroad.

“SARS-CoV-2 variations have emerged as a major virological, epidemiological, and clinical concern, especially in terms of the possibility of vaccine-induced immunity being lost. The advent of the novel variation necessitates an increase in SARS-CoV-2 genomic surveillance,” Colson stated.

How dangerous is the IHU variant? Is it worse than Omicron?

In response to the question of whether this variant is worse than Omicron and other variants of concern, epidemiologist Eric Feigl-Ding took to Twitter. He stressed that while new variants are constantly emerging, they may not necessarily be more dangerous.

At the moment, the IHU has not been detected in other countries or assigned as a variant under investigation by the World Health Organization. Meanwhile, research on it will continue, which will help us better understand this variant.

The Next Major COVID Variant Could Be a Triple-Whammy Disaster
Why are so many Vaccinated People Getting COVID-19?